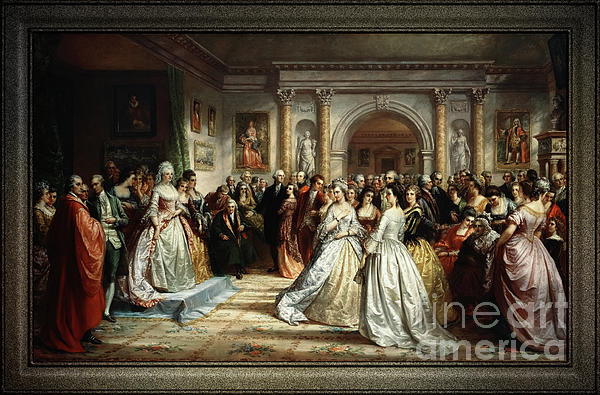 Our premium yoga mats are 24" wide x 72" tall x 0.25" thick and made from natural rubber with a blended microfiber top surface.   The top of the mat has the image printed on it, and the back is solid black with textured dimples for better floor grip.

Wash with a damp cloth and air dry.

Thanks Mohammad. I also have the engraved version uploaded, which looks awesome.

The Republican Court (Lady Washington's Reception Day) c1861 by American Painter Daniel Huntington (1816 - 1906) of the Hudson River School Art Movement and in later life he became a prominent portrait painter, who's was influenced Raphaelesque Italian and German ideals and of the High Renaissance Era. This painting shows all of the significant figures that were involved in the founding of the United States of America; with Mrs. Martha Washington shown prominently on the left on a riser with Alexander Hamilton, John Adams and John Jay to her right; along with other prominent figures which include George Washington, Thomas Jefferson, Robert Morris, General Greene, John Hancock, Edmund Randolph, Oliver Ellsworth, General Lincoln and General Knox... This is a retouched digital art old masters reproduction of a public domain image.