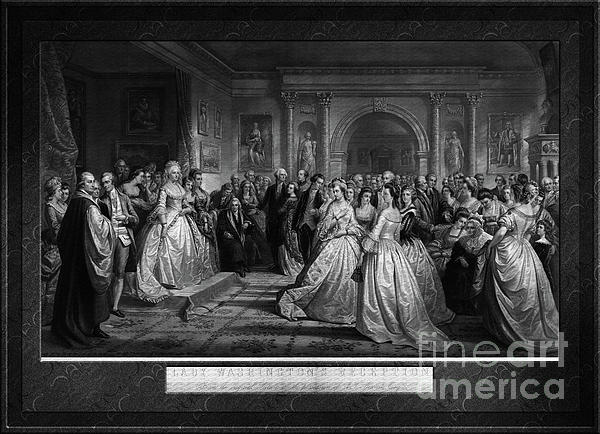 The Center for Disease Control has recommended the use of cloth face masks to help fight the spread of COVID-19.

This face mask is made from 100% polyester and includes two ear loops with adjustable grommets for a comfortable fit.

The printed area of the mask is approximately 7" wide by 5" tall.   This mask fits well on adult mens' faces without the grommets but, due to the adjustable grommets, can be worn snuggly by adult women, as well.

Please note - this is NOT a surgical grade mask. It is not intended for any medical or commercial uses, whatsoever. It is a simple, cloth mask designed for everyday use to cover your mouth when out in public. The mask should not be used in any medical or surgical setting.

We make no warranties that the mask prevents infections or the transmission of viruses or diseases.

Lady Washington's Reception c1867 by Scottish Engraver Alexander Hay Ritchie (1822 - 1895 - who specialized in the Mezzotints method), from a... more

Lady Washington's Reception c1867 by Scottish Engraver Alexander Hay Ritchie (1822 - 1895 - who specialized in the Mezzotints method), from a paintinh by American Painter Daniel Huntington (1816 - 1906) of the Hudson River School Art Movement and in later life he became a prominent portrait painter, who's was influenced Raphaelesque Italian and German ideals and of the High Renaissance Era. This painting shows all of the significant figures that were involved in the founding of the United States of America; with Mrs. Martha Washington shown prominently on the left on a riser with Alexander Hamilton, John Adams and John Jay to her right; along with other prominent figures which include George Washington, Thomas Jefferson, Robert Morris, General Greene, John Hancock, Edmund Randolph, Oliver Ellsworth, General Lincoln and General Knox... This is a retouched digital art old masters reproduction of a public domain image.